After deciding that I was going to build a shelter for the boat, I decided early on that I was going to do a bow roof style.  I want to clarify that I did not know what that was prior to researching boat building sheds.  As I looked at how others were doing it I knew I would need a large structure with a wide clear span.  The truss style arches of a bow roof shed provided for that.

Additionally since this is technically a "temporary structure" I did not want to go through the hassle of the permitting process.  I live in a rural, agricultural area with very few neighbors.  If I was in a more urban or suburban location I would definitely have looked into the permitting process.  Generally local governments don't go looking for trouble, but if somebody complains, like the fact that there is a giant arched structure in my neighbors backyard and it looks ugly and blocks my view, the officials would have to do something.

Since this will not be a traditional "stick" build like a house and since the roof and sides will be either Visqueen, greenhouse plastic or shrink wrap I felt it would be easier to prove my position that it was a temporary structure if I ever was questioned.  If you have plans to do something similar, a building permit is an important consideration.

Additionally, a traditionally stick built structure would require a real foundation or deep pilings, a lot more lumber, sheathing and roofing materials and all those associated costs. I could not justify the significant added expense.

As I said before I was frustrated by the lack of specifics I found online for a bow roof shed. Not just specifics on construction but associated costs as well.  Since one of my goals for this blog is to provide others considering a similar project with actual data points that will help in their decision making process, I will provide  as many specifics as possible.

The two best options that I found were the Stimson Marine bow-roof shed/greenhouse and the Shamrock Aquaponics Greenhouse.  Both were priced under 30 dollars and provided very detailed plans.  I had trouble reaching Stimson Marine by phone so I went with the design from Shamrock. I am glad I did, as they provide real architectural drawings you could use if you needed a building permit.  The downside for the Shamrock plans was that the directions were written by a person, who I would guess, was a gardener first and a builder second.  The instructions were a bit confusing and some things conflicted with the architectural drawings.  Additionally I found the author sometimes used nominal and actual dimensions interchangeably which can change material requirements significantly.  However, shamrock's customer service was excellent and the author quickly responded to my emails and provided me with the necessary clarifications.

After thoroughly reviewing the plans I made a materials list and began to shop around for a supplier.  I went with 84 lumber with mixed results.  The customer service is excellent and the staff is very knowledgeable.  On some things their prices were great and on some things they were not.  I was disappointed in the 8foot 2x4 stock I received.  for the price I paid I was disappointed to see that I had received #2 stock instead of select or #1's.  To add insult to injury it was bad #2 to boot!  lots of partial live edge's, gouges and knots.

I ordered double the amount of 2x4's than I actually needed.  Remember the part about using nominal and actual dimensions interchangeably?  Well I did not review my materials list thoroughly enough prior to ordering my material.  Luckily it worked out because those ugly #2's will work perfect for the floor timbers on the boat, so I will save them for later when I get to that point.

If I had ordered perfectly, the cost for all the lumber to build the boat shed would have been around $1200.  A number I am very comfortable with for this size building, thousands cheaper than a traditionally stick built structure.  Additional costs included $200 for the site work.  The site work consisted of a bobcat clearing and leveling a grassy area on the back of my property.  I paid $300 for 15 tons of washed #1 stone delivered.  Those are excellent prices in this area and was largely because I'm lucky to have friends in a lot of different trades and I asked around.  My construction worker neighbor donated a large roll of commercial grade ground fabric to put under the stone he had laying around.  The only other expense will be the plastic I use to enclose the building.  Depending on what I use, those costs will be between $100 and $400.  So when it's all said and done I expect this building to cost around $2000.

I laid out the building foot print with string lines.  I carefully measured to get the dimensions that I needed and measured diagonals to ensure that the building was square.  The building will require 20 holes to be dug.  These holes will anchor the 4x4 posts in the ground that will make up the foundation of the structure that the arches will span across.  I will set the four corner posts in concrete but the rest will just be buried in earth and rocks.  To prevent up lifting from wind loads I drilled holes in the bottom of the 4x4's and drove 8 inch sections of rebar through the holes.  The corner posts have 2 pieces of rebar driven through perpendicular to each other. When either buried or encased in concrete they will be extremely rigid. 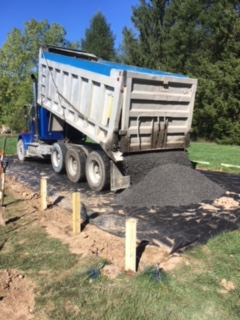 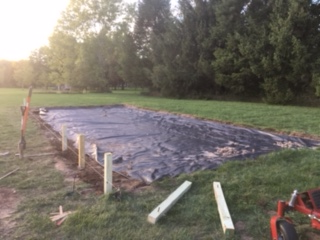 I have enlisted the help of my 71 year old father and conscripted my 14 year old son to assist in the digging of the twenty holes in the ground.  That process is moving along slowly as the ground in my area is extremely rocky with hard packed clay. The picture below illustrates what we are dealing with in my soil conditions. 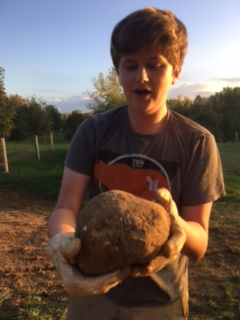 Next time I'll show you how the jig that forms the arches is built and show you a prototype arch.
Posted by Six Points Wood Works at 2:18 PM