Looks good from behind

What an adventure it's been.  Truly, you just never know where life will take you.  A few weeks ago the digital media director for Totalboat epoxy sent us an email asking about our project.  They wanted to highlight our project on the Totalboat and Jamestown distributors websites.  We happily accepted and were delighted to so see links to our site from such large marine related company.  There was even talk of a small partnership opportunity, that Totalboat calls an ambassadorship, in which we would highlight their products, receive a small discount on our purchases and do a little mutual promotion.  Time will tell but it was awfully flattering just to be considered.  If you watch Acorn to Arabella you'll see them doing something similar and they have a video about their experiences touring the Jamestown distributors shop.  We sometimes forget that there are regular people behind these companies that we perceive as faceless corporations.  Totalboat and Jamestown distributors are made of good people and, to my eye, have earned our patronage.  You can check out their stories HERE or HERE. 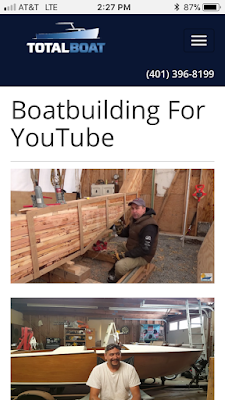 Keel layout is in it's final stages.  We used a combination of our patterns and the CAD rendering of our boat to layout all the stations and the rabbet.  I'm going to say right from the start that we did have a few small discrepancies.  Nothing that makes me uncomfortable, but when working in the real world sometimes things got to be off by a 1/8" or so here and there. Everything from the thickness of the glue lines to slight differences in different tape measures, a little bit here or there adds up over time.  I'm a Type A kind of guy and I like things to be exactly how they are supposed to be.  However as a first time boat builder I have to accept that over these distances we are dealing with, sometimes things won't be perfect. 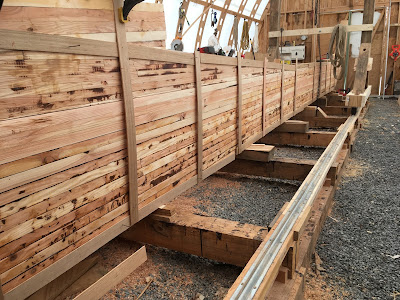 I admire the pro's and the experienced amateurs I read about or watch online.  However, every builder is really the only who knows what's not right and nobody is perfect!  Just keep that in mind on your projects when the real world does not match the editing and clever camera angles of the flawless project you see there.    So for or any discrepancies, we just split the difference and things look darn good.

With all the stations and the rabbet marked it was time to actually spring a batten for the full rabbet line.  The rabbet is the point on the keel where the outside of the finished planking enters the keel.  It's like a triangle cut into the side of the keel to the angle of entry of the planking at each point along the entire length.  The angle is continually changing so when originally cut out it's just a rough cut.  The designer recommends cutting to the flattest angle indicated in the plans as you can always steepen up the angle when you actually get to planking.  Since our bottom planking runs side to side instead of the more traditional end to end, adjusting those angles can be done one plank at a time.

Nothing complicated here, we just used a long piece of white oak scrap held on its marks with some finish nails.  Then it was just a matter of marking the line formed by the batten with a pencil. 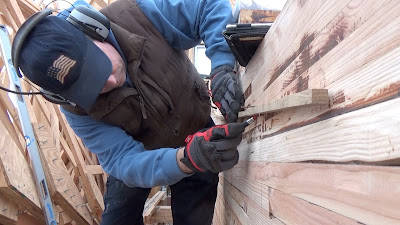 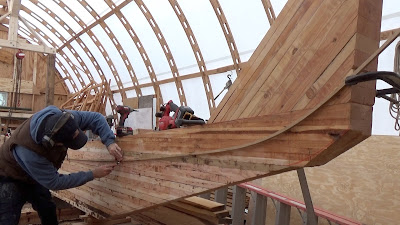 The next step will be to actually cut the rabbet, but I'm still working out how I want to do that.  An online friend gave me the idea of building a jig and using a router. That seems really slick so I'm trying to work things out in my head.

While temperatures are still a little to cold here in upstate NY to use any epoxy, I wanted to get our last frame for the transom assembled.  If you remember from a few months ago, before we disassembled the framing table, we laid out the pattern for the transom on some red rosin paper.  We unrolled that paper in our basement and used some double sided tape to secure our planking setback blocks on the lines. 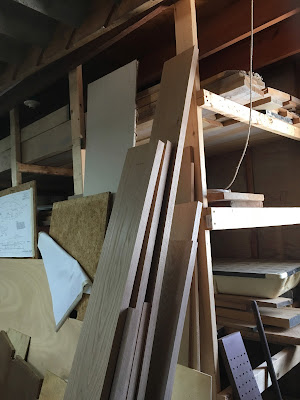 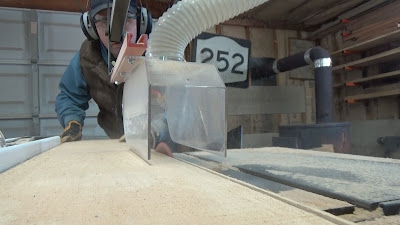 We machined up some white oak and went to work.  Assembly is the same as when we built the frames.  A process of laying out our lumber on the lines and marking angles and intersections for accurate cuts.  I was a little confused on how the actual assembly of this frame was to be completed so I added a some gussets and pocket screws.  The result is probably a little over engineered but we never complain about that here! 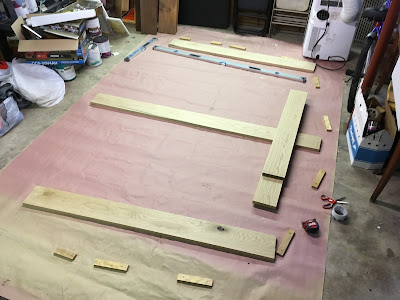 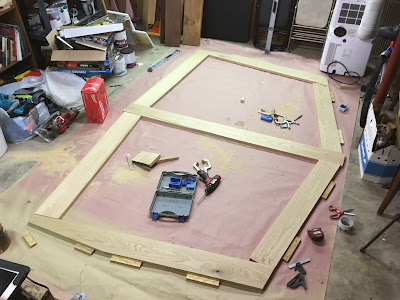 Each intersection was glued with epoxy and secured with outdoor pocket screws.  The pocket screws were really just used for alignment purposes but they do add a little mechanical strength. 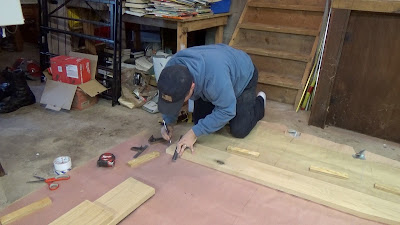 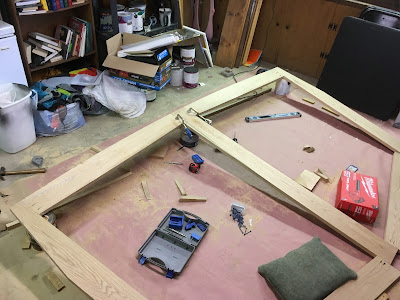 Once everything was dry fit and secured with one pocket hole screw to hold things in position, it was time to cut the curve at the top of the frame that forms the deck of the aft end of the boat.  This was accomplished in the same way we laid out our rabbet.  All the measurements to form the correct curve are included in the plans.  Then it's just a matter of working off the appropriate base line and measuring up at the specified location.  Once again a white oak batten and some finish nails formed the curve and a pencil traced the line. 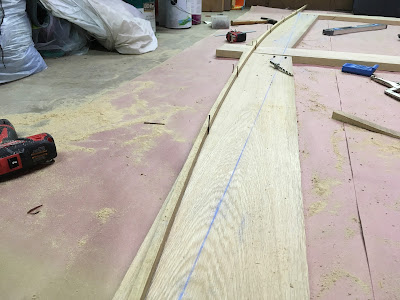 The real strength of all these intersections was the addition of plywood gussets.  Just like the frames, we used cardboard templates to produce accurate gussets. 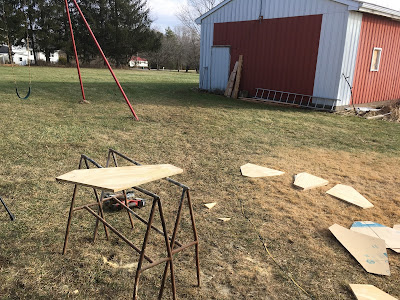 For final assembly we used epoxy for all the joints backed up by the pocket hole screws.  The pockets were then filled with thickened epoxy and a coating of Titebond III wood glue was applied.  We then laid the gussets in place and secured them with coated deck screws. 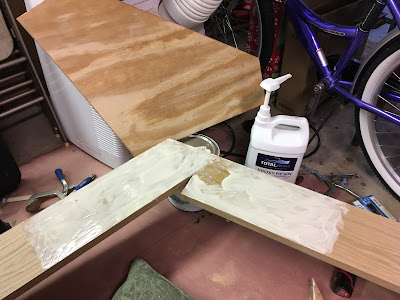 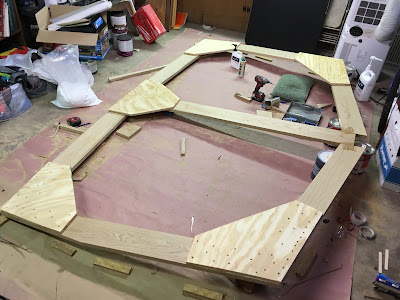 While the transom is still laying down we took the time to cut the chine notch, just like the frames.  There is still more to be done to complete the transom, but we stopped here to keep the weight down for lifting it into position.  Once she's secured to the keel, the transom will get a layer of solid white oak planking, followed by 2 layers of 3/8" plywood.  When it's all said and done, each frame intersection will be backed up by 3 1/2" thick work of material.  Robust indeed! 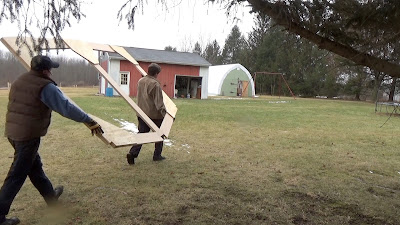 Once complete my son was pulled into service for the big install!  We definitely could have used some more help, but with the aid of our gantry crane we muscled the transom into position. 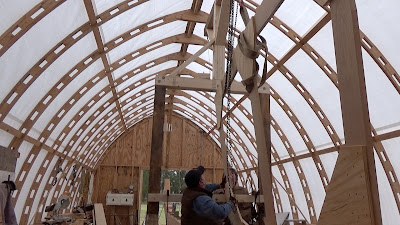 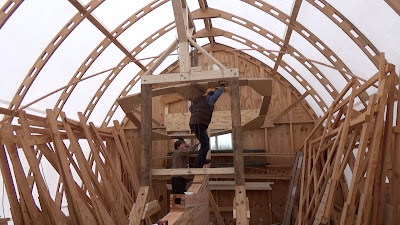 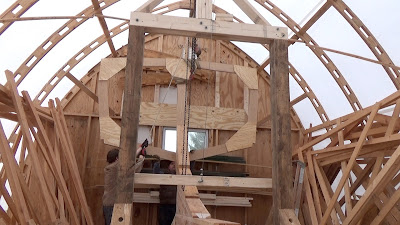 A little chisel work on the keel was required to get things to fit near perfect but the effort was well worth the result.  A little back and forth of trial and error got an excellent fit. We used a combination of our rolling gantry crane and a block and tackle secured to the ridge beam, to do most of the heavy lifting. 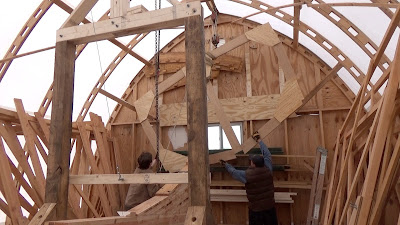 In a matter of an hour or so the transom was dry fit into place.  She sat plumb on her marks and the angles looked good.  Some fine tuning will be required but nothing major.  Once we get some warmer temperatures she'll be ready for epoxy. 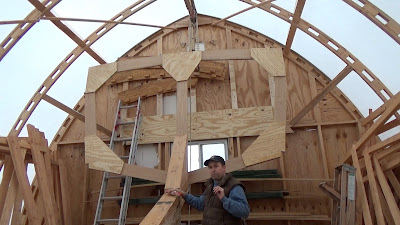 It was a few weeks of work from rough lumber to install but we continue to find as much time as we can for boat building.  I try to never pass up an overtime opportunity at work and so far this year, the opportunities have been plentiful.

Sometimes it's down right fun, like last weekend when the state paid us to patrol along the walking path's of the Erie Canal.  We stopped at lock 33 and I grabbed a few photos.  It wasn't boat building fun but at least I was close enough to dream about doing the loop! 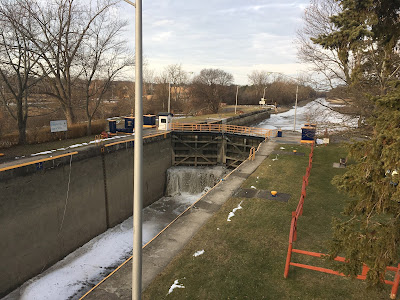 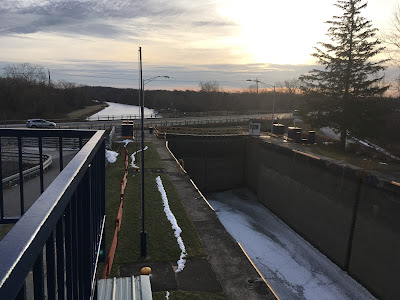 We got our keel bolts back from the galvanizer and things look great.  I'm glad I took the time to mark each bolt with the punch set because even after being dipped I can still see the marks.  That'll sure make things easier for identification purposes. 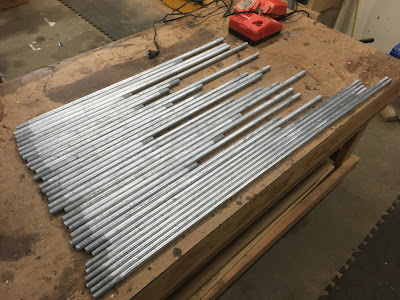 Finally we want to thank everyone for stopping to check out our project.  As I have said before it's been really fun connecting with people from all over the world.  Australia, England, Ireland, Malaysia and eastern Europe just to name a few.  So many have offered tips and advice or just a word of encouragement.  It makes the effort of writing and filming very much worth the knowledge and motivation it has provided.  So thanks!  Please send us an email or leave a comment and let us know what you're working on and where you're from.  The web has made our world so much smaller and it's great to connect with people who share a passion for creating.

If you have questions or would like to see something specific in our next blog entry or video please let us know.  If you like what you see, share our project on Facebook or instagram.  Help us spread the word and let google ad's help fund the Sea Dreamer Project!

Posted by Six Points Wood Works at 3:28 PM No comments: