There is a saying that "hesitation kills".  I think it's origins are from the military but it's equally true in law enforcement.  However, like many things, it can be applicable in many other situations.  Hesitation can kill a good deal on a big purchase, It can result in a lot more work when you miss a weather opportunity and hesitation can be equally deadly for our dreams.


As I've said before, somewhere along the line of growing up we stop dreaming.  We dismiss it as childish, impractical, or a waste of time.  On the rare occasions where we let ourselves think about what could be, we often put it off for some indeterminate time in the future; someday.  The unfortunate thing is we never know how many "some days" we have left.

It's with sad news that I learned that our boat designer, George Buehler, died unexpectedly from an aortic aneurysm on February 28, 2018.  He had been loading his truck for a fishing trip when his wife found him collapsed in the driveway.  He was rushed to an area hospital and underwent emergency surgery.  His treatment failed and George passed away.

Our deepest condolences go out to his family and we pray they find peace.  I would like to believe that George had one final lesson for us with his death.

Don't wait for tomorrow or someday if you dream of something.  Start taking steps today to make your dream happen.  Any tiny step is a start, and beginning is the hardest part.

With George's death, the future availability of his designs and plans are in doubt.  For the many who have been dreaming of building their own Buehler designed boat, hesitation may have killed their dream.

I have had some conversations with marine industry people and I know every effort is being made to keep George's designs alive and available to those that are interested.  However there are no guarantees in life and this situation is no different.  We at the Sea Dreamer Project can only hope for the best and pray that the future availability of George's designs continue on.

A reporter for Soundings magazine tracked me down for an interview related to George's obituary.  She was looking for some perspective from a home builder inspired by George.  We talked for quite a bit but what I hoped for the most, was that his wife and family knew that George's life mattered.

We all hope to impact the world in some form with our lives, to leave our mark.  Few of us do, in any lasting sense, but the goal is to do some good within our sphere of influence.  I told the reporter that even though George was not curing cancer or creating world peace, his contributions to the world were still vitally important.

In one of George's books he said one clients wife called him a "dream merchant" as she argued over specifics of her husbands proposed design.  Her intent was to imply that he was filling her husbands head with unrealistic expectations that he couldn't possibly achieve.

Maybe she was right, but inspiring people to dream big is no vice.  George inspired thousands, maybe hundreds of thousands, to dream big.  More importantly, he instilled the belief that not only were those dreams possible, but within their reach and ability.  Inspiring people to do, to act, to try is, perhaps, one of the greatest things we can hope to achieve.  George did it.  He lived it.  He showed the rest of us how we could do it too.  A rare combination indeed.

The world is a better place because of George Buehler.  My hope is the family realizes and takes comfort in that fact.  God speed George, rest in peace. 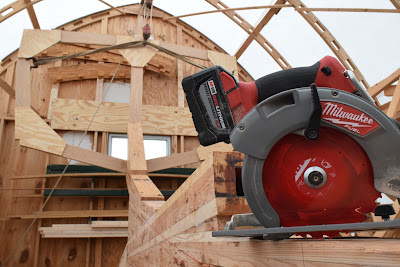 If I didn't have enough motivation already, now I know I have to build a Duck that George would be proud of so work goes on for our 41' Diesel Duck.

We removed the dry fit transom in preparation for the transom knee glue up.  We got lucky with some unseasonable warmth so it became as good a time as any.  We made sure the sternpost was perfectly flat and prepped for epoxy.  We set up a couple of stop blocks to keep the knee from sliding around to much and mixed up a batch of epoxy.  We installed the knee after applying some neat and then thickened epoxy and secured it with a few screws.  This was a difficult clamping situation with the angled knee.  Another benefit of epoxy is that it only requires moderate clamping pressure.  In this situation, the screws held things together nicely until the epoxy cured. 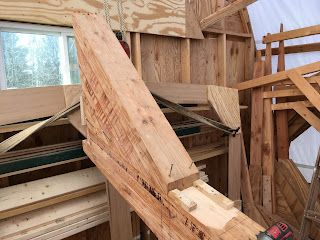 While daytime temperatures were in the 60's, we knew at night it would be much colder.  We built a very rudimentary tent and placed a small electric space heater within.  Our fast set hardener requires temperatures not fall below 40 degrees.  I placed a cheap digital thermometer within the tent and zeroed it out.  When I came out to check it the next day it showed the temperature never dropped below 42 degrees.  Success! 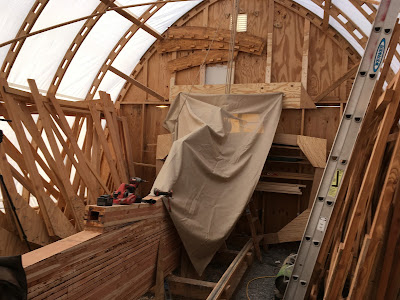 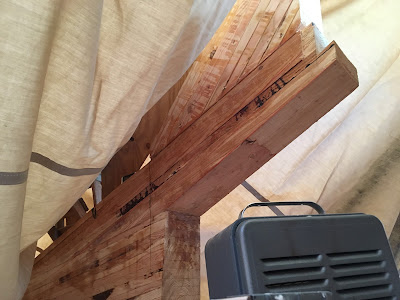 With the knee secured it was time to get started on the rabbet.

I went around and around on how I was going to do this.  Circular saw, chisel, angle grinder, router.  I knew I could cut the bearding line easy enough with the circular saw as that angle was only 22 degrees.  While I continued to think how to get it done the easiest and most accurate way possible, I got started cutting the bearding line. 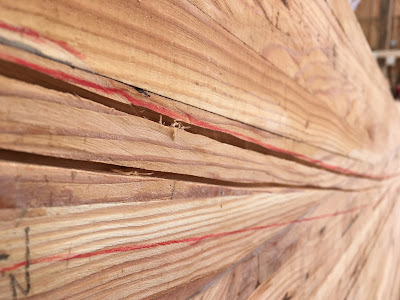 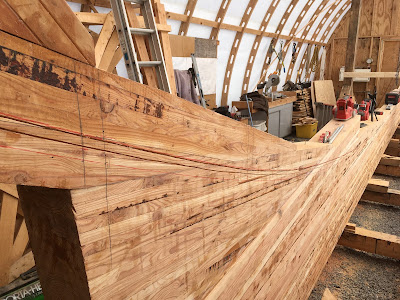 After marking the rabbet and bearding line locations based off the plans, a batten was sprung around some finish nails tacked in place and the line was marked with a pencil.  With the circular saw set to 22 degrees and the depth at 7/16 of an inch,  I proceeded to run the saw down the bearding line.  I reset the saw to 90 degrees and with the help of a test cut on some scrap, established an appropriate depth approximately 1/2" down from the bearding line.  Another parallel cut was made to the bearding line along the length of the keel.  This gave me a rough guide for the appropriate angle to cut for the rabbet. 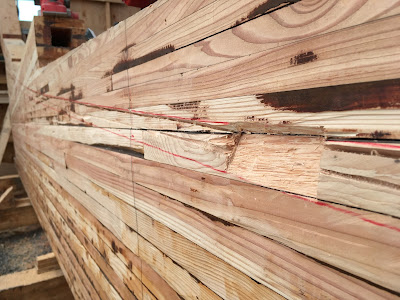 With lines cut on both sides of the keel I chiseled out a small portion to get an idea of what was going to work best.  This process was highlighted in our last video on YouTube and viewers gave us lots of ideas on alternate ways to complete the job.  I haven't had a chance to try it, but it looks like our Rockwell multi-tool along with the Turbo Plane blade on our angle grinder will get the job done relatively quickly.

After the epoxy had a chance to cure on the transom knee it was time to install the 5/8" bolts.  Drilling these long, wide holes is a little stressful in light of our last failure.  However these holes are drilled down the center of the timber, so there is little chance of them blowing out the side.  Even still I wanted to drill them as straight as possible so I came up with a new design for our drill guide. 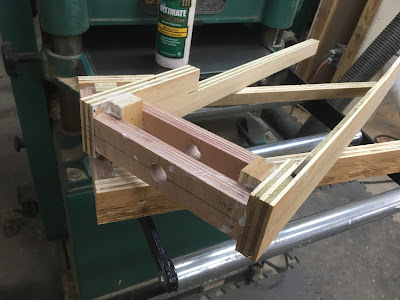 We used some more scrap frame pieces and plywood to build a jig that would slide over the keel and keep our drill bit in line.  Careful attention was paid to keeping the guide holes in line with each other.  Additionally the side pieces were cut in a fashion that made it simple to align with our marks on the keel so we knew our bolts would go exactly where we intended.

Once we measured out where our homemade bolts would go, the jig was screwed in place and the drilling began.  I used a succession of different length bits in order to ensure the most accurate hole.  It's much easier to keep an 8" bit in line than it is a 32" bit.  So we proceeded to step up from 8", 18" and finally to get us through, a 32" bit. 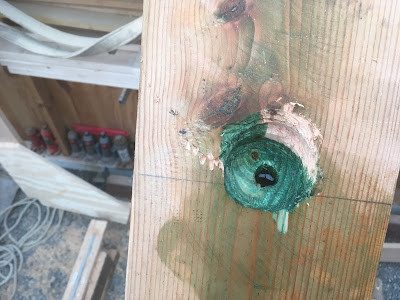 It could have not gone better and I found that the bit only wandered about 1/4" off it's intended course.  For this application it was well within tolerances.  Once the hole was drilled, we plugged the underside and filled the whole with copper napthanate preservative.  We let that soak in for a few minutes then drained the hole.  After that we lubricated the bolt with bees wax, lightly threaded on a nut and pounded her home with a hammer.  We then put washers and nuts on each end and tightened things up. 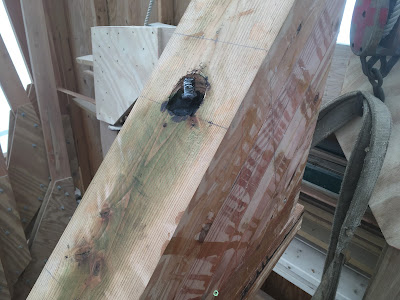 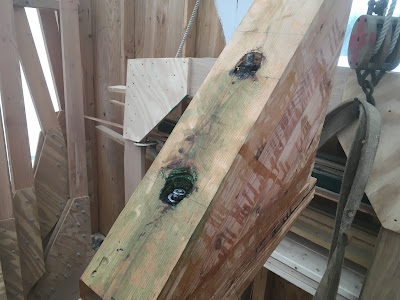 I guarantee that knee is not coming off without a fight!

After that we moved on to dry fitting a floor timber and station 38.  Details on that we'll have to wait but I was very happy with the preliminary fit.  I'm hopeful that things will come together nicely this summer.

As always, we are so grateful for all the support of our readers and viewers and we hope you know we appreciate it all so much.  Be sure to check out our Facebook page and Instagram accounts along with our YouTube channel.  Links are located at the top right of this page for Facebook and YouTube.  Just search "Sea Dreamer Project" on Instagram and it'll pop right up.

Stay tuned for our next step as we begin the floor timber installation!
Posted by Six Points Wood Works at 2:59 PM No comments: