I love building!  Models, forts, furniture and houses.  I assume I caught that bug from my father, who as paid firefighter that had a kooky work schedule, did lots of construction jobs on the side.  As time went on and I got older we remodeled the houses we lived in, built decks and put roofs on.  Always hard work that I was grateful that I didn't have to do full time, but I always enjoyed it on my terms.

Soon after buying my first house I started furnishing my very own wood shop.  In school I always enjoyed wood shop and was eager to create something with my own hands.  As I look back it's sad that schools don't encourage young people to consider working in the trades.  After 15 or so years and another house later, my woodworking was growing a little stagnant.  I still loved it, but I wasn't finding any motivation.

After buying a long dreamed of Jetski for our family cottage a new passion for the water was born. As I learned more about the water, I stumbled across the Glen-L site and an idea to build a boat was born.  I bought the plans for a small boat and got to work, but I dreamed of something bigger.  I kept reading and searching and then I found a book on Amazon: Backyard Boat Building by George Buehler, I was hooked. 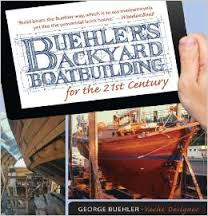 George is an experienced mariner and naval architect.  He has practiced what he preaches and spent a few years cruising the Pacific in a boat built with his own hands.  His no-nonsense approach to building a rugged and seaworthy boat for a cruising couple resonated with me.  He designed boats with the amateur home builder in mind.  His plain spoken approach coupled with minimal "boat speak" allowed the content to be digestible by the lay-person.  He shunned modern boats that he referred to as "bulldozers of the sea". Those that were better suited to the marina than the open water. Furthermore, his goal was to bring back cruising boats that regular people could afford.

His designs are simple but elegantly efficient.  He believed in a boat that made a comfortable home for 2 people, not wasting space on rarely used guest accommodations.  His boats are trim by modern standards, which makes them quite fuel efficient.  Envisioning his boats as ocean crosser's, they are over engineered with a small profile.  The "stuff" on deck is kept to a minimum so it glides through the wind as easily as it does the sea.

His boats are designed to be built efficiently as well.  Most of his designs incorporate off the shelf lumber available in any big box store.  This concept helps keep costs down and helps fulfill his mission of making his boats both sturdy and affordable.  It also allows a person with average woodworking skills to believe that he, in fact, can build a large cruising boat!  George doesn't pretend that by using dimensional lumber and galvanized fasteners that his boats are built for the ages.  However, while the other guy spends years saving the thousands of dollars required for Silicon Bronze screws and teak planking, his boat builders will be enjoying the water.

I went back and forth between a few designs that I liked.  The Diesel Duck was always my favorite but the design plans were also the most expensive.  My wife, knowing me well, suggested I buy what I love.  She encouraged me not to compromise on my dream, sage advice.  After reviewing the study plans and trading a few e-mails with George, I purchased the Diesel Duck 41 plan.

George was elated and advised me that he had been dreaming of updating the DD41 design but never really had a reason until now.  He went to work updating the design with knowledge from many previous builds and real world performance at sea.  A few months later I had my plans and went to work reviewing them. 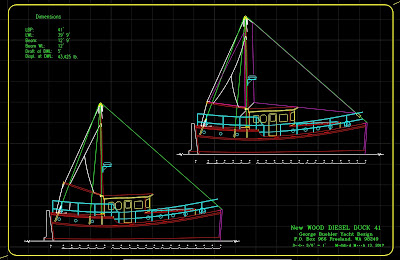 Having only limited knowledge of much simpler boat plans, it took some time to figure things out. However with careful study along with using Backyard Boat Building as a reference, things quickly came together.

There is already plenty to read on this site about the building of the boat, so I won't get into that here. This section is dedicated to the boat itself.  This will be our home on the water and very well may take us all over the world.  Here are her numbers:

I love the layout George came up with and as of this writing that is basically what I plan to do. However, as George will tell you, the whole point of building your own boat is to get exactly what you want, so I will make some changes.  I want to add a head to the master state room and a few other minor adjustments. 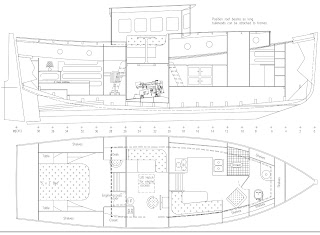 Her tanks, as designed, hold around 640 gallons of fuel.  With the right engine, cruising at around 5 knots in good condition gives her a range of over 5000 miles.  Enough to get us anywhere we want to go.  The back up sail plan that helps steady the roll also gives us an emergency "get home" rig. George is a sailor at heart and all the Ducks have various sail plans.  Since his designs are so efficient, they make for a decent sailing vessel.  You won't win any races, but if the unthinkable happens, you'll be able to get back to land.

People always ask me how much will it cost to build and how long will it take.  I simply don't know either answer.  It will be done when it's done and will cost what it costs.  I will savor every moment as I dream of being rocked to sleep somewhere in the middle of the ocean under the tropical stars.  This boat is designed to take us anywhere we want to go.  I intend to get us there one piece of lumber at a time.