What's in a name?

She's got a name! 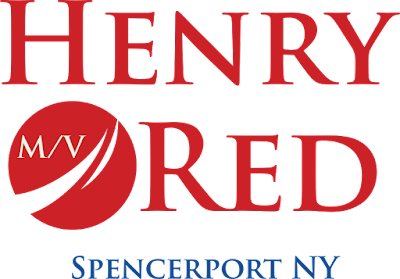 We chose the name of our 41' Diesel Duck and couldn't be happier.  The Henry Red, named after the grandfathers of my wife and I.  Henry, My wife's grandfather was a World War II US Navy veteran and boater.  He lived much of his life around Annapolis, Maryland where he owned many boats, both power and sail.  He was a strong, moral and practical influence in the life of my wife and someone very special to her. 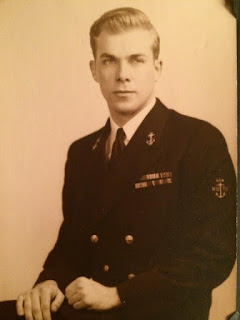 My grandfather, Frank, affectionately known as "Red" for his red hair and proclivity to always carry "atomic fireball" candies in his pocket, is probably the reason I am the way I am.  He was a foreman at a local utility by trade, but he was a mister "fix-it" in life.  He was a carpenter, builder and welder.  He was a problem solver and hard worker who inspired my father to do the same.  My father and grandfather in turn inspired me to believe in the value of hard work.  Additionally he made me believe that given enough time and patience, there really wasn't anything I couldn't do. 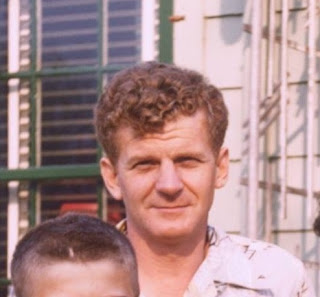 So now we'll motor into the future memorializing the memory of two very special and inspirational people.  On to the build.

I apologize for the lack of content here and on YouTube recently.  In early May my son sprained his ankle playing tennis at school.  Following the X-ray which confirmed no fracture, the doctor noticed a "spot" as he called it, on his fibula. This "spot" is known in the medical community as a lytic lesion.  Something they call unknown bone tumors.  Obviously additional testing was required which involved a couple specialists and an MRI.

Needless to say his mother and I were in a state of utter panic.  Even though in the real world of medical follow up's, having to wait 3 weeks to finally get an answer indicating whether the tumor was malignant or benign is a pretty quick turn around, it was a brutal month.  A parent can't help but fear the worst.  That fear is absolutely paralyzing.  It took everything I had to focus at work, let alone  attempt to go out and work on the boat.  However, we were so relieved to learn that the tumor was benign!

Additional follow up will be required along with potential treatment options, but nothing to really worry about.  While my immediate reaction was relief, I was quickly reminded of how paralyzing fear can be.  Whether that fear is for a loved one, fear of failing or fear of trying.  We dream of things and either put them off or dismiss them because we fear something on one level or another.  I saw how my fear for my son, completely unrelated to boat building, sapped every ounce of motivation from me to go out and work.  I have no advice to combat that paralysis other than to be aware of it.  Fight back against fear and do the things you dream of doing.  I would have been wise to listen to my own advice.

On to boat building! 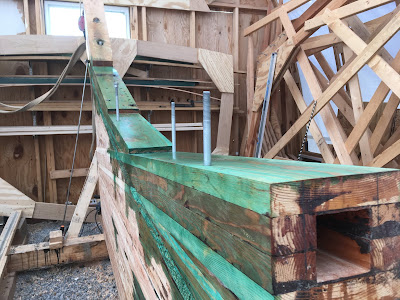 With all of our holes drilled around the shaft log, installing the bolts was a breeze.  We drilled a countersink on the underside of the keel for the nut and washer to fit inside and then pounded the bolts in.  We also took the time to repair the blow out's we had when drilling for some drift bolts a few months ago.  This involved plugging the holes with some hardwood dowels of equivalent diameter.  We gave them a coating of glue and pounded them in.  Once in place we cut them flush with a hand saw. 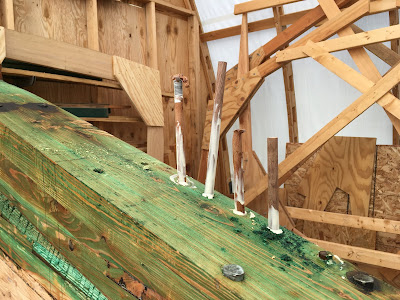 Next up was the transom install.  The only issue with this part of the build was that the transom was just beyond the reach of our gantry crane.  This required  an eye bolt be installed through the ridge beam of our building.  Once that was in place we attached a block and tackle and used it to hoist the transom into position.  The install went surprisingly smoothly with the help of my son.  We pre-coated the transom knee and the center support of the transom with straight epoxy.  A thickened coat of epoxy was then applied and the transom was moved into place.  With the use of a level, the center support was carefully checked for plumb and then some temporary #14 wood screws were used to hold things in position until the epoxy cured.  Once the first layer of planking is in place we'll secure everything with 5/8" bolts. The next day we got started on the first layer of planking.  If you recall this will be a composite planked hull.  That meaning our first layer will be 3/4" thick traditional planking, followed with two layers of 3/8" thick plywood.  The first piece of planking was the most challenging but really not all that difficult.  The edge of the plank had to be beveled to match the angle on the horn timber, a simple rip on the table saw.  With that dry fit in position the shape of the transom was traced on to the plank and then cut out on the bandsaw.  A little fine tuning and it was ready for install.  We again used the same epoxy procedure as previously stated and held things in position with some galvanized #12 wood screws. 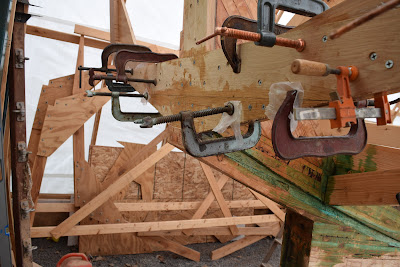 Like everything in boat building, it's time consuming but rather enjoyable.  We only had time for the first couple layers, but the process will be the same all the way up.

Our next task was installing the floor timber for station 38.  We had previously prepped this piece so it was just a matter of a little fine tuning to get it installed.  We coated the contacting surfaces with copper napthenate  and then applied a coating of Dolfinite bedding compound on the keel where the floor was to be installed.  After making sure everything was still level and plumb, two drift bolts were pounded into position to secure the timber forever! 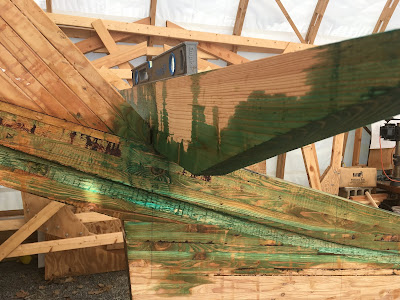 With the floor in place I got a little impatient and wanted to dry fit the frame for station 38.  With the help of my son we hoisted up station 38 with the gantry crane and then I was able to roll it into position by myself.  This is where the challenge of boat building really comes into play.  You build all these components, cut the rabbet and hope everything lines up and was built according to the design.  I was extremely happy to see the frame slide over the keel (following a little sanding) and sit on the rabbet just wear it should.  Things were level and plumb and all that was left was the application of more copper napthenate and then the application of bolts. 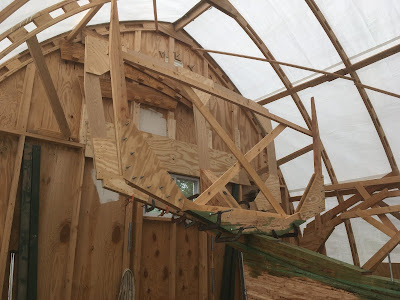 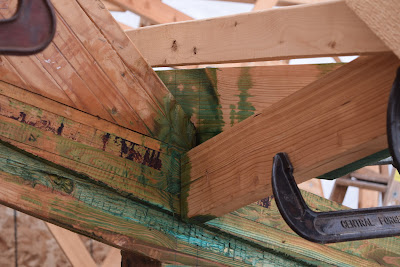 Things were just dry fit and held together with clamps to check the fit.  We really need to install the stem so we can install a string line down the center of the boat shed above the boat.  With that in place  we can drop some plumb bobs to ensure alignment all the way down. So before we bolt things up we'll get that done. However it was really cool to see things in position. 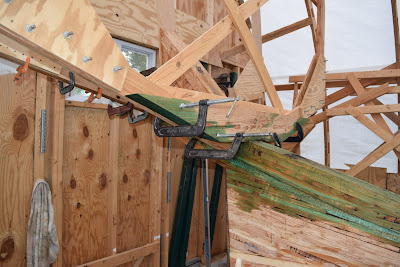 We picked up a few items from an ebay vendor in India.  The brass door signs and port lights came from some old ships that were broken up on the beaches of that country.  I wanted to do a smaller test purchase on these items before I considered making a larger purchase of more ship parts.  I was very pleased with the service and shipping time. 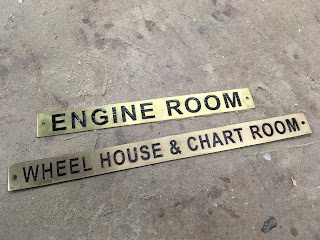 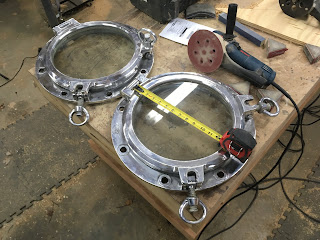 We received a wonderful care package from our friends at Jamestown Distributors and Totalboat epoxy.  These folks have been so generous with helping spread the word about our project as well as providing some pretty sweet gear.  We are so thankful for their support.  I asked for the banner just because I think they're cool, but Kristen over at Totalboat through in a few extra items in the shipment.  Awesome! 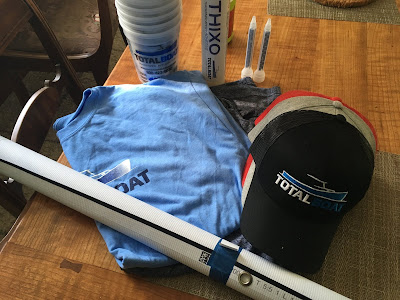 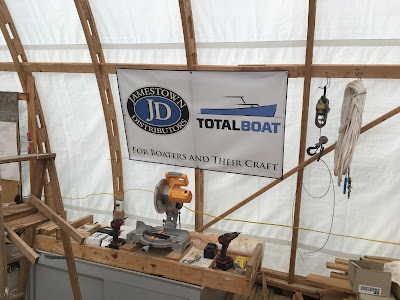 In hopes of sharpening my seamanship skills I picked up an overtime shift working on our 33' SAFE boat.  As a border county, we participated in a federally funded border security detail and I was happy to spend 8 hours out on the water with some real pro's. 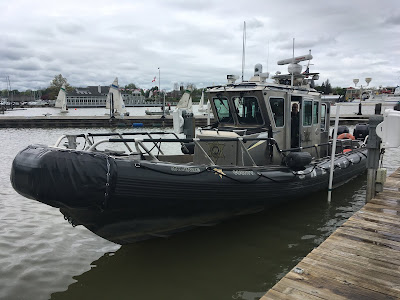 Finally, A big thank you to all the readers and viewers who purchased Sea Dreamer challenge coins from Doug and Betsy over at SV Seeker.  Your generosity resulted in us receiving nearly $1000 last Friday from their sales.  An unbelievable blessing and we are so appreciative.  We don't talk much about money here.  There are ways for individuals to get involved financially at the top left of this screen if people are interested, but we feel weird asking people for money.  This challenge coin project makes things a little easier with people actually getting something in return for helping support the project.  To us, it's win-win all around and we are super excited about it's potential. 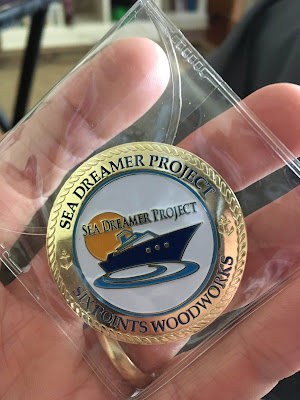 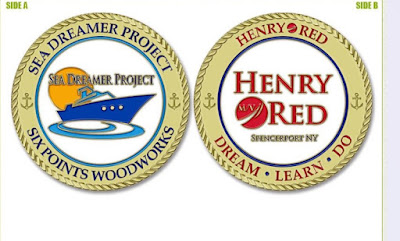 We also have to thank Doug and Betsy for this amazing act of kindness.  This was a huge project to organize and complete among several builders from all over the country without asking for anything in return.  If your interested in purchasing one for yourself you can follow this LINK.  You should know that Doug and Besty are only taking the portion of the sale price that covers their costs and sending all the profits to the various builders.  You would be hard pressed to find more generous or kind individuals.  I would of course encourage you to check out the items they have for sale supporting their project in the Junk Store.

Thanks for checking out our project and we hope you follow along with our YouTube series as well!
Posted by Six Points Wood Works at 2:31 PM 1 comment: