This time of year is a whirlwind and I'm sure that's true for most of us in the states and Europe.  Family commitments, ample overtime opportunities at work and just day to day obligations have left little time for boat building recently.

I have come to recognize that the more I get overwhelmed with "stuff" the more I tend to shut down and not do anything.  It's a bad habit that I'm trying to break myself from.  It hasn't been easy recently as much of the "stuff" I'm struggling with have to do with work, and the changes that began January 1.  I work for an elected official, way down from the elected official, but work for him none the less.  After nearly 40 years of consistency with department veterans earning their way to the top, an outsider was elected, defeating my boss.  This was heartbreaking for me personally as many old friends lost their jobs after the unsuccessful re-election of the boss. Change is inevitable and logically I know that.  However, I still struggle when things do not remain as I know them. It troubles me to see an outsider put on the same uniform that was merely won and not earned.  I'm finding it difficult to accept a person who does not know the culture or understand the ethos of our agency.  Additionally, the onset of stifling cold weather has really sucked the energy out of me.  It's no fun to work outside when you can't feel your toes and your fingers freeze to your metal tools.

We all have struggles, we all have obstacles to our happiness and success.  People grow and move on. Change is a factor in all of our lives.  We must continue to pursue our dreams and find motivation in the joy of that pursuit.  I would be wise to listen to my own advice.....Now if I could just control the weather!

In between my un-motivated "funk" and working overtime I have found a few hours here and there to keep working on our boat.  Our biggest project to date has been the building of our rolling gantry crane.  It took quite a few hours to complete but was not that costly.  Regardless of cost or effort I think it will pay huge dividends when we begin setting our frames. 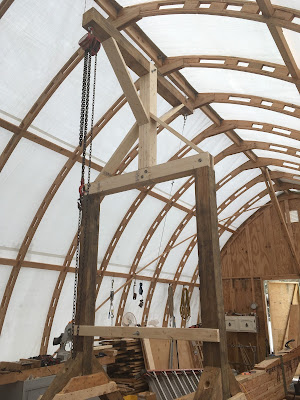 We started with a fixed gantry crane and heavily modified it.  However, most of the main pieces were left at their existing dimensions so we saved some time not having to shape new timbers.  The "A" frame of each side of the crane was beefed up with through bolts and additional bracing.  With the final dimensions of each leg set and the base for the wheels to attach to was next to be assembled.  This consisted of a couple of 2x6's bolted and screwed to a wheel mounting plate on each end.  Careful attention was paid to keeping the frames for the base square and the wheels perpendicular to the assembly.  Plenty of screws and bracing were used to keep the whole system robust, probably more than necessary.  The base sections were then bolted to each support side.  Again, careful attention was given to keeping the base perpendicular to the vertical support. 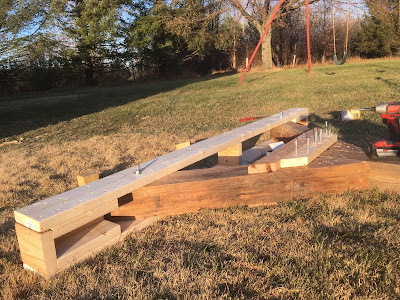 Each completed assembly was quite heavy and the admiral was pulled into service until each side could be temporarily braced.  The attention to detail in keeping things square resulted in each side rolling smoothly on the track and each vertical piece being perfectly plum. 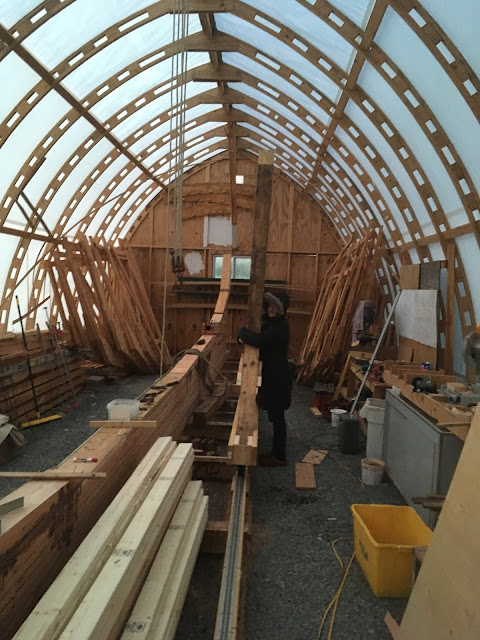 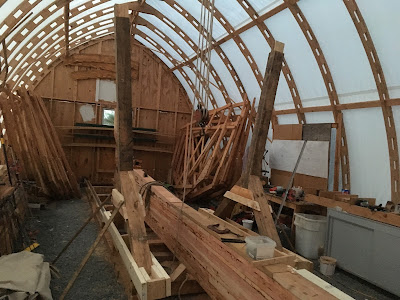 With the aid of corner level used for setting fence posts, each side was plummed in both directions and then secured to each other. 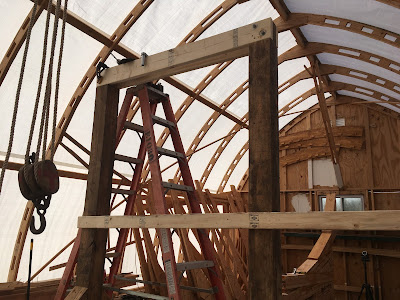 The tops of each of the vertical supports were notched to receive a 2x6 on both sides.  Once tacked in place with a few screws, each joint was drilled out and secured with carriage bolts.  Again, this is probably over engineering but I'll never have to worry about over loading it. 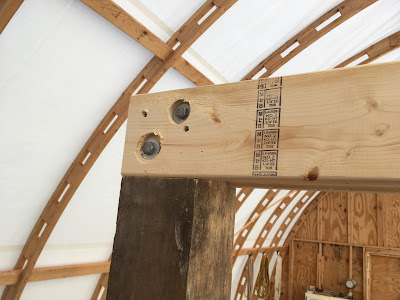 As I've talked about before, due to space limitations, our crane needed a relatively unique design in order to give us the height we need.  A single center support was laminated up of 2x6's.  After being planed to size, the base was mortised so it fit between the top horizontal supports.  Once in place it was drilled out and bolted into place.  The top support, perpendicular to the entire crane assembly, was also mortised and then bolted into position as well.  It was quite an ordeal to get these heavy pieces into place. It involved some questionable tactics on my part while balancing on top of a ladder.  The end result proved quite ridged and I was mostly pleased with the outcome.  However, It quickly became apparent that some sort of counter weight or support would be needed on the opposite end of the top support piece. 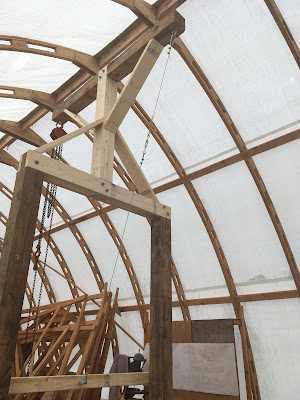 I went back and forth between using actual counter weights or some kind of support system.  I decided on a support system consisting of stainless steel cable (left over from a railing project many years ago) turn buckles, eye bolts and a couple of carabiners. Eye bolts were secured to the top piece opposite the lifting side and the lower center section support.  The cable was then roughly cut to length, eyelets were made with the appropriate hardware and then connected with a turnbuckle in between.  The turn buckle was tightened to put tension on the cable but not overly so.  I gave it the hanging test using my body weight and it seemed to work great.  A few additional braces were added and the crane was complete.  It rolls very smoothly and has all the height we'll need to set our frames.

As we have done with everthing on this keel, each keel section that is glued together is backed up by a mechanical fastener.  A fastening schedule was provided in the plans and calls for several 18" long, 1/2" drift bolt.  Drifts are essentially just big nails.  They are drilled out partially undersized and then a sledge hammer is used to pound them home.  The only complicated part of the operation is in the aft end when the drifts have to be installed on either side of the shaft log.  The holes need to be far enough away from the side to avoid obstructing the rabbet, but not to far or angled to punch through the shaft log. 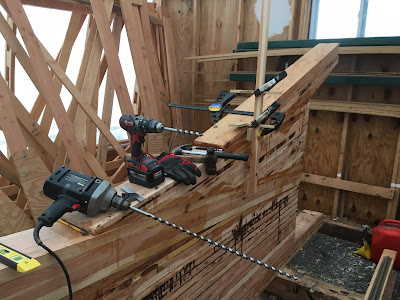 This was another part of the build that I was dreading.  I was very imtimidated about having to drill such long holes perfectly straight.  I built a drill guide to assist with keeping things plum in both directions. 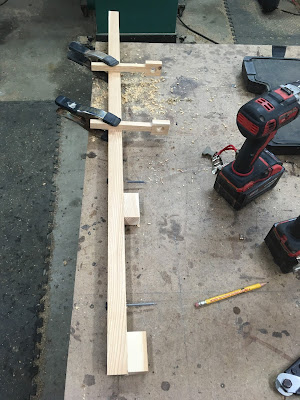 After attaching the guide to the keel with a couple of clamps and a nail, I chucked the extra long auger tip drill bit into our heavy duty corded drill.  The hole was completed without incident and the drift was pounded in, No problem!  I was relieved and thought to myself I had worried for nothing.  How wrong I was!

I moved to the opposite side and repeated the process.  The first hole made it about 8" before it encountered some kind of embedded metal.  This was nothing I installed and must have been something that got in there when the wood was a tree.  After all we've already found one bullet, maybe this was another!  I started a new hole a few inches up from the first.  I made it down about 12 inches before disaster struck.  The drill bit deflected and blew out the side!  On the bright side at least it did not punch through the shaft.  I withdrew the bit and moved it a few inches away and began again.  Same result! 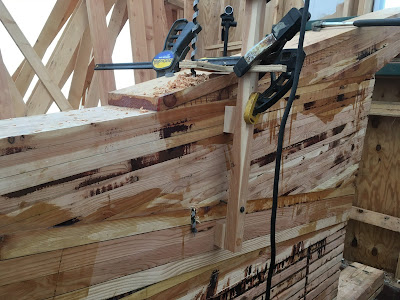 I had read that boat builders preferred "barefoot"drill bits for long holes.  That did not make sense to me and I went with the auger tip.  Additionally, it seemed no matter how straight I attempted to keep the bit, the auger style drill bit was not stiff enough to keep from deflecting.  Maybe I was pushing to hard, maybe the bits were not high enough quality, never the less, I went back to the drawing board.  Luckily I had purchased a 40" long, 1/2" fluted bit.  This bit by it's style was much more robust and was not easily deflected.  I moved a few inches from the now 3 failed attempts, and with the fluted bit and drill guide I was able to complete the hole.  The drift was pounded in and it was on to the next two.  The remaining drifts were drilled out without incident using the fluted bit.  As all our drifts are installed at opposing compound angles, the drilled holes had to be made at slight angles to one another.  The opposing compound angles of the drifts ensure they will never come out and will provide support to the assembly regardless of which direction the loads are applied.  An important consideration when the boat is rolling and pitching in open water. 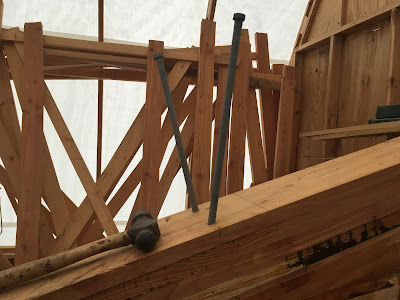 With the drifts in place I now get to worry about the through bolts that must be drilled out for 3 stations in the aft end.  That will have to wait until we are actually ready to install the floors at those locations.  Our galvanizer will be shipping our keel bolts back to us today so that install will be happening sooner rather than later.

I next went on to complete the final rough sanding to clean up the glue squeeze out from the various keel components.  Our angle grinder with an 80 grit flap disk made quick work of that.  The keel was now ready for the final layout for each of the stations.  All that was left to do was to jack up the keel to the height indicated in the plans.

We used our new gantry crane and some tow straps to lift it to the prescribed height.  We then added cribbing and some shims to hold it in place nice and plum.  My next step is to add some side supports to keep the keel from being accidentally knocked over.  As we have added on all the pieces in the aft end the entire assembly has gotten quite tall and a bit tippy. 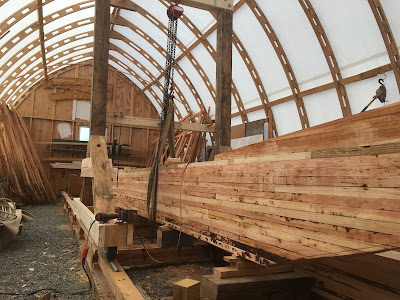 I also wanted to show you a little experiment that I conducted with a laminated cut off from our keel.  I cut some of the pieces down to size so they would fit in the shop wood stove.  I know, I know, you're not supposed to burn this stuff but it provides free heat and it was in the name of science!  I threw a laminated piece on the fire at the end of one of my work days when the fire had burned down to a smolder.  When I came out the next morning the piece was heavily charred but not completely burned up.  What was amazing was the fact that the glue lines were still holding.  It could be broken apart but it was the wood that was breaking and not the glue joint.  It was a real testament to the strength of modern resorcinol based glue (Aerodux 185).  It really inspires confidence in the strength and durability of our keel. 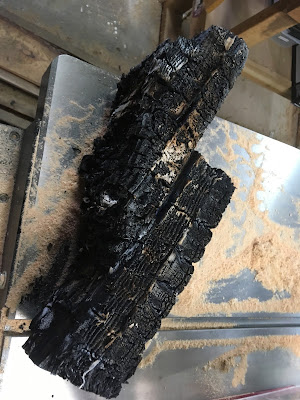 As I write the current air temperature is -1, with wind chills down to -30.  This makes for tough building conditions but I hope to get out in the shop this weekend to get started on laying out the stations on the keel and machining up some white oak for the transom.  I look forward to a productive new year and renewed building vigor as spring is a mere 5 months away!

Thanks for checking out our project and happy new year to all!