The admiral came out for a visit and to check on our progress.  Strangely, she does not yet see a "boat".  I have to encourage her to use her imagination. 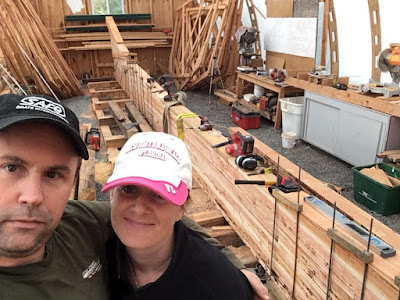 As I talked about in our last post, I needed a way to lay the keel down flat on the building cradle.  I didn't want to just knock it over and let it slam down.  I worried that 1500 pounds of wood crashing down would throw the cradle out of level and plum.  In George's book he includes pictures showing farm jacks and chain positioned on wedges to achieve the goal.  However I thought that looked overly complicated and a little unsafe.  Not to mention I don't own any farm jacks, I brainstormed for another idea.  I happily admit I am not the smartest guy in the world so it takes me quite a long time to come up with a plan I like to overcome a challenging situation.  For weeks I came up with idea after idea that I thought might work.  Usually as quickly as I thought of them, I dismissed them as unsafe, un-workable or not strong enough.  My last, and what I hoped best, Idea was to build a gantry crane. 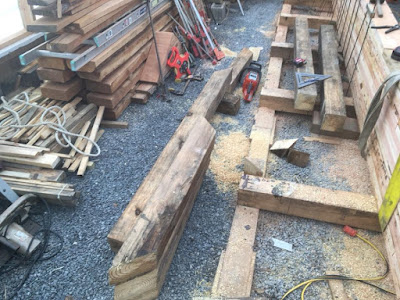 My plan was to use a come-a-long to pull the keel over to its tipping point then use a chainfall connected to the gantry crane to "catch" it before it slammed down.  I still had several of the 6x6 yellow pine timbers that we bought last year from the train salvage company.  They seemed to be a good choice to deal with the forces at work.  It took me a few minutes to dig them out from the other lumber but it didn't take long to cut them to shape and size with our chainsaw.  I cut support braces at 45 degrees to lay against the main vertical post.  I aligned them on the same plain with a 2x4 and everything was secured together with 3" wood screws. 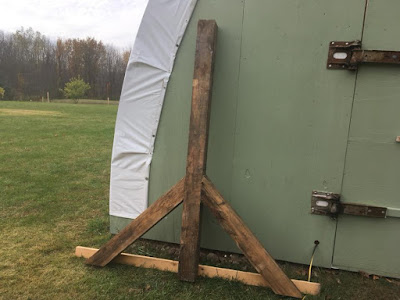 I needed some kind of threaded hook or eye bolt that was long enough to make it through the 6x6 to hold the chainfall.  I could not find what I wanted but I did have a few 1/2" ground augers that were previously used to hold a temporary shed to the ground.  They had a large eye at the end that could accommodate the large hook on the chainfall.  I cut the auger to length with the angle grinder and threaded the cut end.  After drilling a hole through the horizontal beam of the gantry crane I just ran the new threaded eye through and bolted it in with a couple of washers. 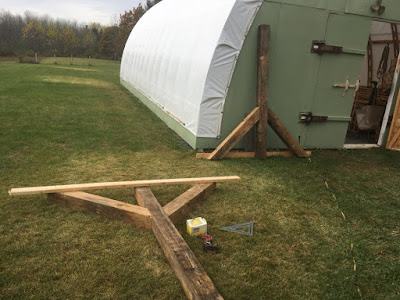 Once that was complete, the main beam was hoisted into place and a few diagonal supports were added.  After plumbing each vertical piece the diagonals were secured with wood screws. 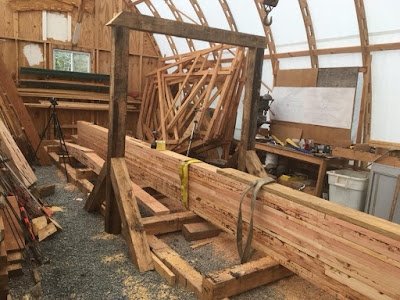 Now came the fun part.  I used some chain to secure the come-a-long to one of the posts buried in the ground that supports our building shed.  I wrapped a tow strap around the keel so the slip knot was positioned at the top of the keel.  I then attached the other end of the come-a-long to the tow strap.  I put some tension on the entire assembly and things looked promising.  I used another tow strap wrapped around the keel and attached that to the chainfall on the gantry crane.  I was careful to position the slip knot on the come-a-long side of the keel.  As the keel tipped I wanted the gantry strap to tighten up near the top of the keel in order to prevent the keel from kicking out.  A few more cranks on the come-a-long and the keel was leaning.  It took very little effort to get to this point. 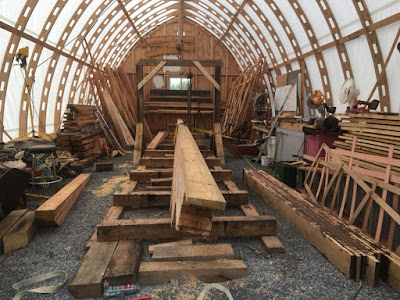 With a little tension on the chainfall strap I tried to gauge how far the keel would fall before the chainfall engaged.  I made it a little tighter, this was all just my best guess.  There was nothing left to do but go for it.  A couple more cranks on the come-a-long and the keel was falling...........

It worked!  with very little drama, the keel tipped over and fell a few inches before the chainfall engaged and stopped it from crashing into the cradle. 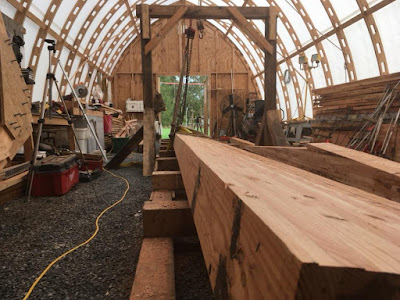 It was then just a matter of lowering the keel down the rest of the way.  Again, it required very little effort to complete this and within a few minutes all my worries were eased. 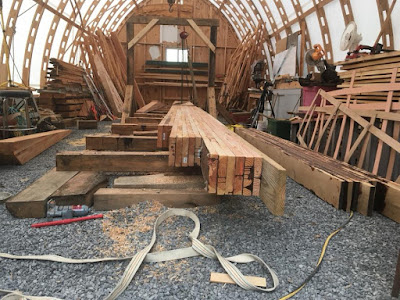 With little time to appreciate my success we got to work cutting the angle at the bow.  We laid our patterns on and double checked our marks that we made on the keel last week.  It's a good thing we double checked with the patterns because I discovered an error.  For whatever reason, I incorrectly measured the distance between stations 4 and 2 by an inch.  The patterns quickly identified the error and the correction was made.  I then used a pencil to trace the angle of the bow along the pattern.

I didn't want to have to flip the keel over, back and forth for the cutting of the angle.  With the other keel pieces we used our timber saw to cut our marks on both sides.  This time I planned to make the cuts all from one side.  I used our timber saw to cut the first 3 1/2" of depth along our marks.  I then used our chainsaw to finish it up.  While the cut line was not as neat and smooth, it was effective and much easier than the alternative. 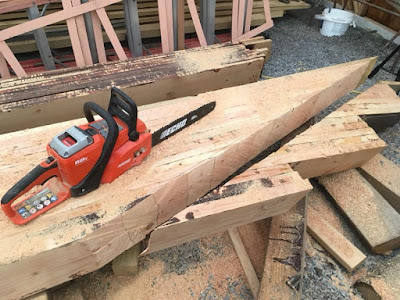 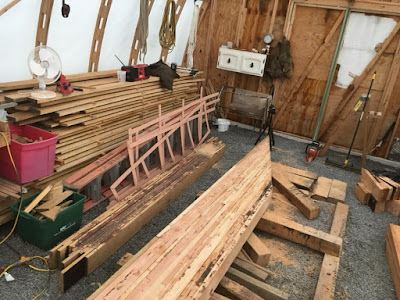 This was a big step to my eye as the keel really began to look like part of a boat.  With that job done I had one more task I wanted to complete.  I checked the forecast and knew that this was going to be one of the last days with sustained temperatures above 50 degrees for the year.  Living in upstate NY the fact that it was still this warm was a blessing in and of itself.  So instead of glassing and epoxying the bottom of the keel like I intended, I decided to stand her back up and glue on two more keel pieces with resorcinol.

To stand her up was just a matter of lifting it a bit with the chainfall and then using the come-a-long to pull it up from the opposite side.  A couple pieces of blocking prevent it from sliding on the cradle and with a few cranks of the come-a-long she popped right up.

I cleaned up the keel in preparation for the installation of the forefoot with a hand plane (yes I own hand tools).  This was asking a lot from our clamps to pull these two massive pieces together so I wanted the joint perfect so the glue would adhere properly.  Then it was just a matter of mixing up some glue and attaching the forefoot and the 17' aft section piece in place.  I used a mixture of parallel clamps and the threaded rod clamps we used for the keel. 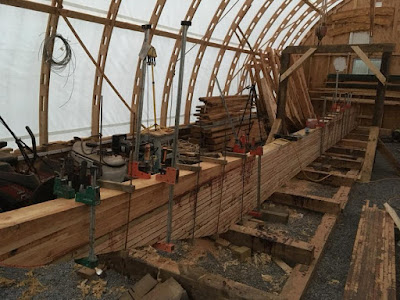 Now I have to decide if I want to lay her back down and complete the glassing I spoke of earlier or move on to other tasks.  We are very close to installing the floors, cutting our bolts to length and sending them off to the galvanizer.  That sounds like a lot more fun than working with epoxy in colder weather.  Decisions, decisions.

It was a good weekend once again.  It's always so rewarding to see real changes after so many hours of hard work.  Thanks for following along and if you want to see the video of the keel falling over be sure to check out our YouTube channel.  We'll have that video up by Tuesday November 14, 2017.
Posted by Six Points Wood Works at 11:35 AM