This freakin damn roof is going to be my nemesis!  Last week I came home to find our 6 mil visqueen roof had failed again.  There was no major weather event, just normal light breezes and rain.  I guess I should have known something was wrong.  Two weeks ago I noticed water dripping from the roof during a rain storm.  It was not very heavy and I wasn't sure if it was just condensation.  Now it appears that there was a hole in the plastic in the area of the ridge beam.  I'm guessing that the hole grew bigger from the stresses of the wind and eventually grew large enough for the wind to really get a hold of it and rip it off. 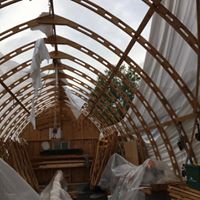 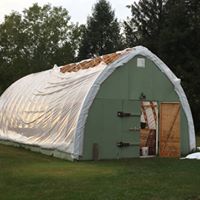 As I began to remove all the torn plastic, it quickly became apparent that there was another contributing factor to the damage.  The plastic tore like paper, ripping cleanly like it was being cut by a razor.  I knew UV degradation would eventually destroy the plastic, but I didn't think it would happen this quickly.  The UV rays from the sun made the plastic extremely brittle.  Couple that with the abrasion of the plastic rubbing against the ridge beam in the wind and a premature failure was inevitable.

So back to the drawing board we went.  The first thing I wanted to address was the abrasion issue.  It was very obvious where the most stresses on the roof were.  All along the ridge beam and at the peaks of the end walls are where the plastic is under the most tension.  I used some old carpet from my fathers house to cover all those areas. 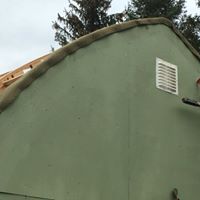 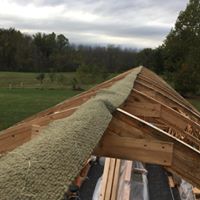 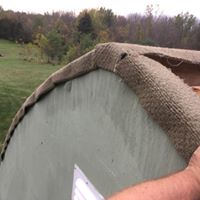 Replacing the roof is a full 2 day job and I had no desire to repeat my mistakes.  I began to research alternatives for the new cover.  There are custom options available but they mostly work with very large structures like salt sheds and construction projects.  They use a heavy duty plastic fabric with a UV coating and claim up to a 15 year life span.  That kind of durability comes at a considerable price that I just could not afford.

I have seen and heard of others using large tarps to cover their building but I was concerned how that would block out the light.  That would force me to run electric to the shed and add interior lighting.  However I then found a few manufacturers that produced large white tarps.  Further research found a couple manufactures with UV coated, heavy duty, white tarps.  I ended up purchasing a 12 mil, 3 ply, UV coated 40'x50' white tarp for $290.

I looked at UV treated shrink wrap as well.  However, to get the 12 mil thickness of the tarp with a UV coating, it became very expensive.

This past weekend we went to work replacing the roof with our new tarp.  I quickly realized I should have done it this way from the start.  The tarp is a little more heavy and difficult to hoist up and drag across the structure, but the benefits easily out weigh the negatives.  Additionally, the tarp can be tensioned much tighter than the visqueen.  The visqueen has a tendency to stretch as you pull it so you can never get a tight fit.  The tarp, with it's added rigidity, has much less give which allows it to be tensioned much like a stretched skin aircraft wing.

I monitored projected wind conditions all week and we were lucky to have an extremely calm day on Saturday.  Even so, I enlisted the help of my Brother-in-law, Father, Wife and my son for the install.  Just like last time, we laid out the tarp in the grass and rolled half of each side in toward the center.  The finished roll looks like two parallel pipes laying tightly together.  The "pipes" were then tied to together at a few spots along the entire length to hold it in position.  A rope was then tied to one end and as the entire assembly was hoisted up to the roof on the east side, the rope was pulled across from the west side.  As the rope was pulling the tarp across, the lines holding the "pipes" together were cut in preparation for the unrolling.  With a little assistance from our ground crew with a long painters pole, we quickly had the roof in position to be unrolled. The pulling rope was disconnected and then tarp was easily unrolled down each side of the boat shed.  The extra hands we enlisted helped hold things in position until we could temporarily tack the roof in place. 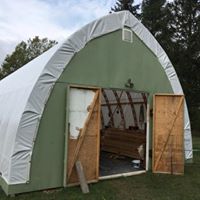 We used the grommets on the tarp as a connection point for our battens along the knee wall.  As we learned from our first roof, screws are not strong enough to hold the battens. We once again bolted them to the knee wall.  Each bolt was backed up by a plywood "washer" on the inside of the knee wall.  This gives us a considerably more holding power capable of withstanding the wind loads our shed will be under. 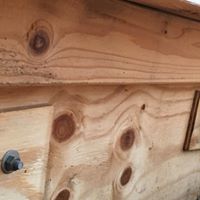 We used the grommets again on the end walls along with wooden battens.  A combination of bolts, screws and cap washers hold everything tightly in position so the wind can not find a way to get a grip on our new roof.  The finished product maintains a relatively bright interior with a more durable exterior. 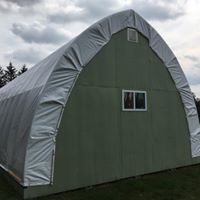 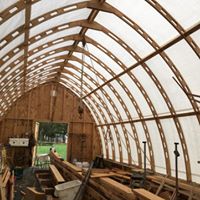 I guess time will tell but, as usual, I have high hopes for success!  Ultimately I don't know what the right answer is.  Spend the big bucks for a more permanent roof, or save the money and be prepared to replace to roof a few times over the course of the project?  I guess if you are doing something similar let your finances be your guide.  However I would not recommend using visqueen if your building is subject to any significant wind conditions.  Our building is completely exposed from the South and West (the most predominant wind directions in our area) and is subject to the full force of the wind and sun.

For only $100 more, the tarp gives us twice the thickness and a UV coating that the visqueen cannot.  Some have recommended green house plastic with UV inhibitors.  However I could not find anything but clear green house plastic.  The clear plastic just makes for absolutely unbearable heat conditions inside.  Our 2nd roof was clear, and the highest recorded temperature over the summer was 142 degrees (F).  I know it will still be warm inside when under direct summer sun, but the white cover should reflect at least some of the heat.

With all of this roof business going on, we were still able to make a little progress on our final glue ups for the last of the keel components.  The deadwood was completed and now just needs to be cut to shape.  All the lumber for the last 17' section of the aft keel has been milled and one sub-assembly has been glued up.  Only a couple more glue ups and we'll have everything for the keel ready for final assembly. 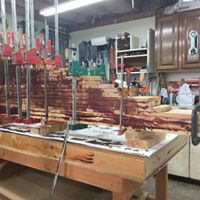 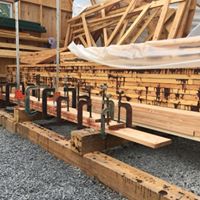 With our work space once again protected from the elements, we'll be able to get back at the actual boat building this week.  I also wanted to share a link to another cool project.  The Sampson Boat Company has a YouTube channel documenting the restoration of the historic wooden sailing vessel Tally-ho.  This is the story of a man from the UK who traveled all the way across the pond and bought Tally-ho for $1, saving it from the landfill.  It's a mammoth undertaking and should make for some interesting watching.

As always, thanks for being here and following along.  We wish all of you good luck on your project and hope you find some time to create something beautiful!
Posted by Six Points Wood Works at 11:04 AM