It's been an excellent week of work!  We are finally seeing some tangible results with items being scratched off our to-do list.  The lower keel assembly is complete, consisting of 15 layers of 2x8's glued with Rescorcinol.  Our upgraded super clamps worked perfectly and as the keel sits, it's nearly perfectly flat.  A few passes with the power planer and she'll be perfect. 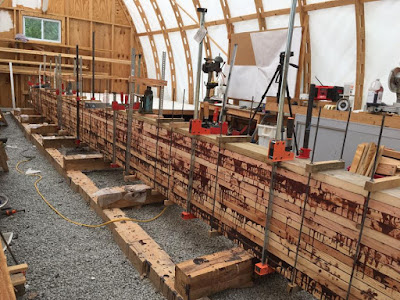 We let the final glue up cook in the clamps for 48 hours just to be sure before removing them.  She still needs to be cleaned up and cut to shape but the largest glue ups for this project are now complete. 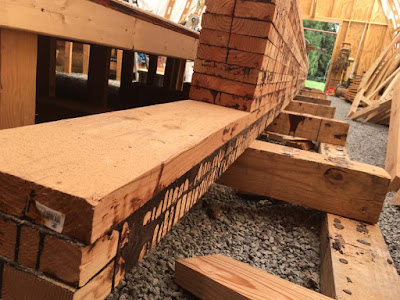 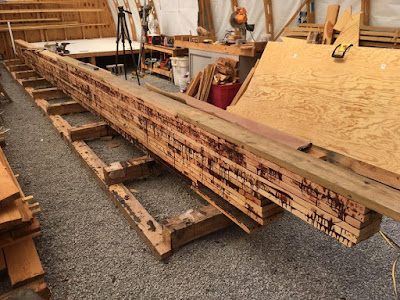 This past weekend we worked hard to reach our next milestone, the frames.  With only 3 left to build I was determined to get these done!  We finished milling up our beautiful larch and made it happen. These frames have become quite mundane to build, essentially repeating the same steps 19 times. However, on Saturday, I got a little surprise.

After cutting the miter for the port side chine on station 24 a long hidden surprise was revealed.  I didn't notice when I made the cut, but after flipping the assembly over I noticed a distinct shape on the face of the cut.  I've heard of other woodworkers finding such treasure but it's quite rare.  The dull grey, oblong sphere encircled by a very thin ring of copper could only be one thing.  A bullet! 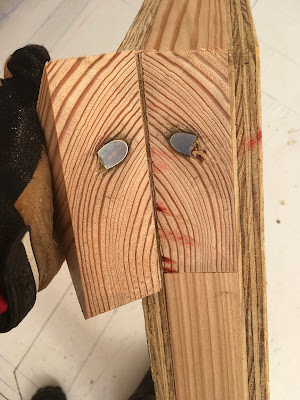 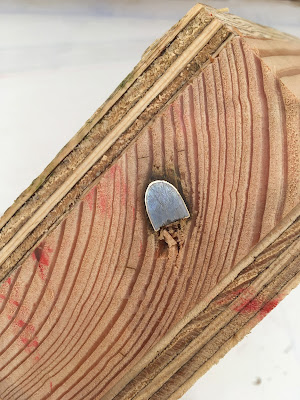 I grabbed a chisel and pried the object out.  My suspicions were confirmed, it was indeed a full metal jacketed bullet, probably a .45 caliber.  It was at least 14 years old judging by the rings, however without the whole tree to examine, I'm not sure exactly how old.  Being that this is Larch, a type of pine, which is harvested fairly regularly it's probably not that old.  I'm told they've been manufacturing these types of jacketed bullets since the late 1800's, but this one is probably from within the last 50 years.

It's kind of neat to think that so many years ago a man with a gun was out in the forest.  Was he there for target practice? Hunting? something sinister? Maybe the shooters bullet missed it's target or perhaps the target hung on this very tree. Whatever the reason, this bullet lodged itself in an unsuspecting tree.  The tree healed itself around the bullet and I'm sure it thought it's secret was safe for eternity.  Then one fateful day, a sawyer in upstate NY felled a tree and milled it into lumber. Still the tree concealed it's past, certain that this needle was well hidden in it's haystack.  Then I came along, machining the board flat.  Positioning it several times on the lofting table until I was satisfied that the best parts of the board were being utilized.  Then it just so happened, that this tiny part of a random tree, in an endless sea of Larch trees, was placed just so, a miter cut exposed it's long kept secret.  And just like that an errant bullet was once again exposed to the world.  Along with it came a story for this author that will be remembered forever. 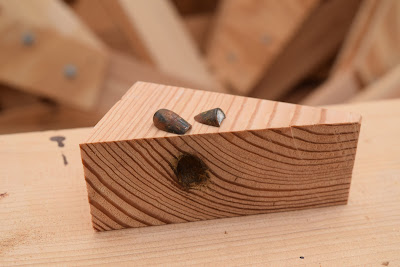 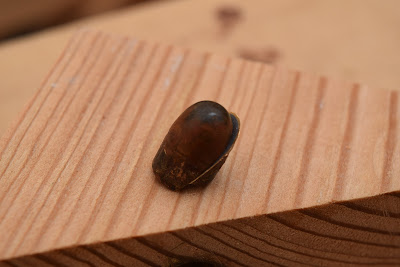 Like I said, I've heard of this happening before.  What makes this interesting is the fact that I hit it nearly perfectly lengthwise.  A few cm's left or right and I would have never know it was there.  Just lucky on this day, but much like life, you just never know what's going to happen next! 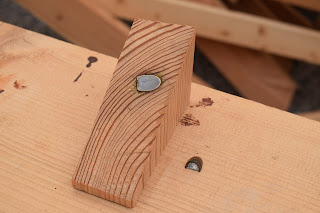 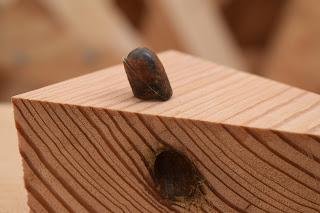 This excitement slowed us down a bit but in short order we were back to work.  We finished up two frames on Saturday and then the 19th and final frame Sunday morning.

It's taken five months or so to complete all the frames.  It certainly could have been done faster but I wanted to take advantage of the warm weather while I could for the other big glue-ups.  Not to mention summer is a time for family, and it's important to maintain balance in one's life.  So here are some of the numbers for the frames: 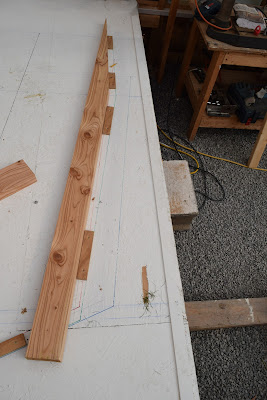 Building them was quite a project in and of themselves, The fact that they are just one part of this build really brings the scope of this project into perspective.

I plan to lay some red rosin paper on the lofting table and loft out the transom.  I'll then save that pattern for later and will dismantle the table.  I'm in desperate need for more space in the boat shed so I'm looking forward to getting the table out of there.

We'll move on to gluing up the remaining keel components, like the forefoot and a knees.  From there we'll finish making our keel bolts and move forward with installing all the components.  There is never a lack of things to do when your're building a boat!  However it makes every step a triumph. We'll celebrate tonight and start work again tomorrow, and so it goes until we splash her.