So far things are going to plan.  We continue to assemble frames on our framing table while enough room is still left around the cradle to begin the keel glue up.  I started out with pen and paper to come up with a plan for the layout of the first three layers of the keel.  I didn't want any seams between layers to be closer then two feet between each layer.  I had the plan before I purchased the 2x8's so I knew how many of each size to get.  I ended up purchasing 2x8's in various quantities of 8', 10', 12' and 16'. The keel is made up of 14 layers of 2x8's.  I plan to do the glue up's for the keel in sub-assemblies of 3 boards thick.  Experience has taught me that it is impossible to apply enough force to the clamps to face glue more than 5 or 6 boards together.  Since rescorniol requires high clamping pressure I opted for a very manageable 3 board thick sub-assembly.  I haven't fully decided on the final keel glue up, but we'll probably glue the sub-assemblies together as we go. 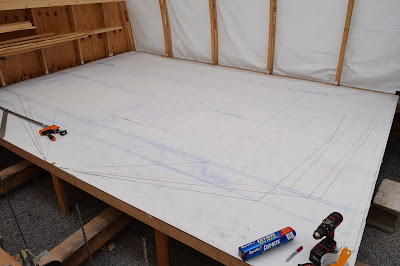 Once the boards were in the boat shop I ripped a straight edge on each piece.  I chose my lumber as carefully as I could but there is no such thing as a perfect board.  You'll never be able to find one perfectly straight and flat so I just combed through the pile for the best ones I could find.  I left the boards oversize so I'll have some room to fit everything nice and smooth and straight.  My power planer will make quick work of that once we get to that point. 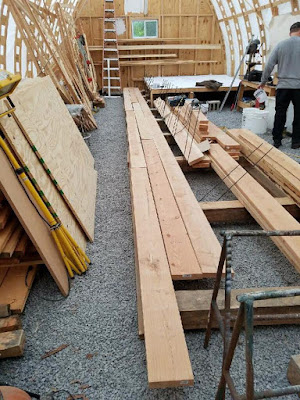 I've been a woodworker for 17 years or so and I have assembled a decent collection of clamps. However I still did not have enough for this glue up.  The assembly was over 34 feet long and because I was using Resorcinol I wanted two clamps on each side every 12 to 16 inches to ensure continuous high pressure once clamped up.  I ended up making 15 homemade clamping cawls.  They consisted of two pieces of 3/8" threaded rod and scrap white oak clamping blocks.  I machined one edge of the clamping block for each piece so it was tapered towards the center.  This resulted in a narrow high spot in the center of each block.  I drilled out holes at each end for the threaded rod to pass through.  I added nuts and washers and once the nuts are tightened down on the edges the center becomes extremely tight, which is exactly what we were after. 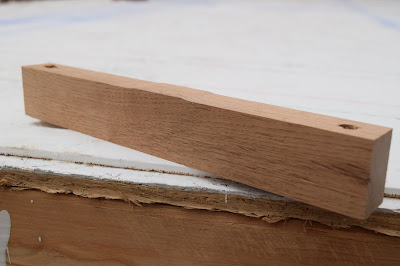 We worked in steps, applying the glue and closing up the joints in stages. The temperature in the boat shed was around 65 degrees which is perfect for the glue to not set up too fast.  However, closing the joint quickly, so it is not exposed to air but not yet under clamp pressure is important as well.  That part of the plan worked well, but I did not take into account how long it would to take to fasten the nut on the clamping cawls down a 36" piece of threaded rod.  After rolling nuts down by hand for what seemed like forever we quickly realized we needed a better plan.  We ended up chucking the rod into a cordless drill/driver and spinning them down that way.  It was very effective and helped keep us moving along at an appropriate pace.

The boards were laid out in position beforehand and ready for glue. We rolled out the glue using what turned out to be not a chemically resistant foam roller. It required frequent changing after it started disintegrating.  We applied glue to all three layers at once, making sure to apply glue on each face. We then flipped the middle layer on to the first layer and applied glue to the opposite face.  We then applied the third layer and attached a few clamps.  On and on this went applying glue to only the boards we were ready to flip until the whole assembly was complete.  We used a large hammer to help align the straight edge that was ripped on each board.  I was not obsessive about making sure everything was perfectly flush.  As I said, once the keel is fully assembled I'll take my power planer to it to bring it down to it's finial dimension. 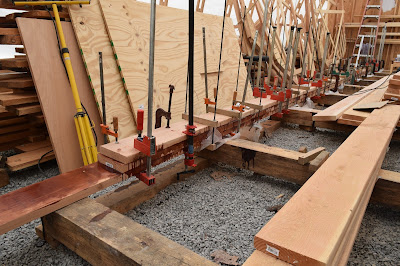 It took about 3/4 of a gallon of resorcinol to complete the job.  We had nice even glue squeeze out along all the joints.  As the instructions indicate, that is a good sign the joint is filled and has not set up.  We had everything in clamps and under full pressure within 2 hours.  We placed wax paper on the bottoms of each of the clamping cawls to keep the glue squeeze out from adhering to the keel. 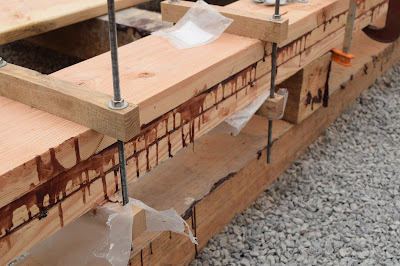 I let the glue set up a bit for about an hour before going back and scraping off the squeeze out with a dry wall mud knife.  All that was left was for the glue to harden and hopefully that glue up will be permanent!

Using epoxy is definitely easier.  The metered pumps make it fool proof and finding all different kinds of epoxy is a breeze.  However, Epoxy is not fully waterproof and Lloyds of London does not accept it as a structural adhesive.  Now, I'm not concerned about getting insurance from Lloyds, but I do want to do things right.  Since the keel will be through bolted and drift bolted together, I probably could have gotten away with using epoxy.  But for only a little more effort and careful measuring, I saved a few bucks and have a completely waterproof adhesive.  I'm using Aerodux 185 which is not your grandfathers rescorcinol.  It cures down to 50 degrees, has some gap filling properties and can be thickened with fillers.  It still requires careful mixing by weight, but a simple postal scale and a calculator make quick work of getting the proportions right.  I'm not advocating either way, as each boat builder has to make his/her own decisions, but don't be afraid of this glue just because of the difficulties associated with the old formulations. 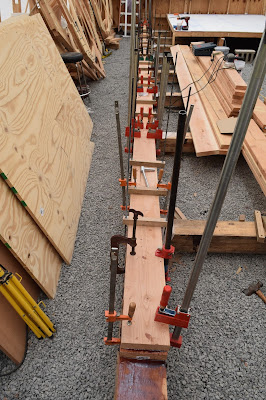 In other news, I attended the Homeland Security Conference this week in Buffalo NY.  Part of the conference offered a tour and boat ride on the Edward M. Cotter fire boat (Engine 20).  The Cotter is the oldest operating fire boat in the United States.  It is captained and engineered by active duty Buffalo FD personnel but the rest of the crew are volunteer.  They survive on a small budget from the fire department but rely heavily on donations to continue operating. 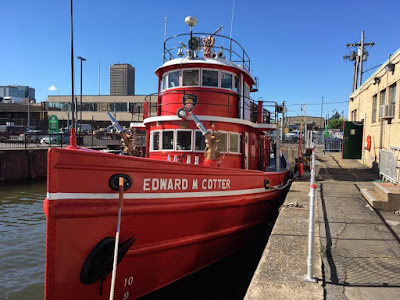 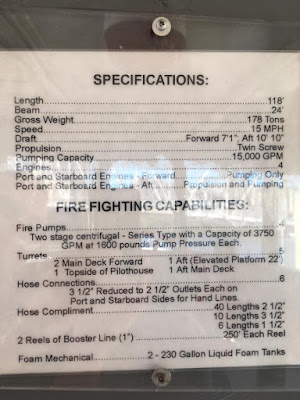 It is an exquisite piece of engineering, lovingly maintained by some dedicated men. She is powered by two, 1940's era Caterpillar diesels which hum like clock work.  When maintenance is required the parts are often fabricated from scratch.  Representatives from Caterpillar have been out to the boat and marvel at how these engines continue to perform. 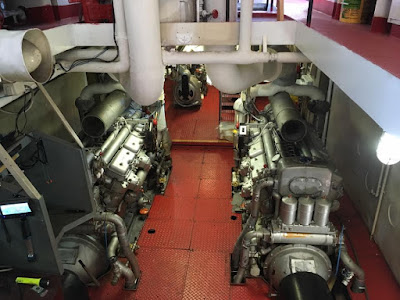 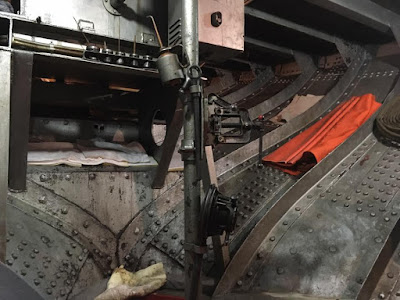 It was a glorious day on Lake Erie, with blue sky's and 70 degree temperatures.  We cruised for about an hour with the boat putting on a small display of it's firefighting capabilities. 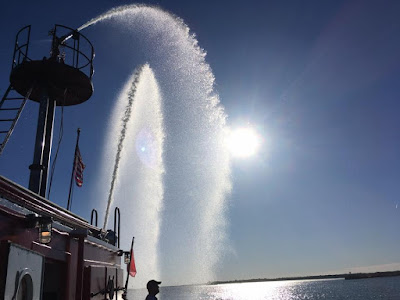 It was a fine day and probably my favorite part of the conference.  If you are ever in the Buffalo, NY area I strongly encourage you to stop by and check it out.  As much as I would love to have our readers become sponsors for the Sea Dreamer Project the Cotter is certainly more deserving.  I hope you check them out and buy a shirt or a cap.

As for us, we'll continue to work on our project as much as time will allow.  I'm not going to feel bad about enjoying the summer or spending time with the family so I think progress is going to slow a bit for a while.  However I will continue to keep everyone updated and I hope you take on a dream project of your own.

Thanks for following along and keep your eye out for the next episode of the Sea Dreamer Project on YouTube.
Posted by Six Points Wood Works at 2:12 PM