When I bought my current home in 2007, one of the major selling points was the fact that it had a 24x32 barn on the property.  It was perfect for my woodshop and it had an attic for lumber storage.  My father was equally excited because he planned to secretly unload all the "junk" he had been holding onto for the last 50 years.

Every few weeks something new would show up in my barn.  Most of the things I could not even identify.  They must have been from my grandfather, who like many from his generation, fixed what was broken with his own hands.  He worked as a foreman for the local utility company and had amassed a collection of industrial tools that I still cannot identify.  He never threw anything out and when he passed back in the 80's my father took custody of all these items.  My father followed right in his footsteps and when he saw something being discarded that he thought might be useful someday he took it.  I'm starting to learn that his strategy is now paying off.

Back in the 80's when the city of Rochester was remodeling one of the firehouses they replaced the large bay doors.  The old doors had very large, industrial hinges that were going to be thrown away.  My father took them and held onto them.  A few years ago they found their way into my barn.  A couple days ago they had a new purpose as hinges for the doors on my boat shed. 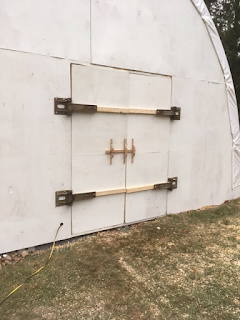 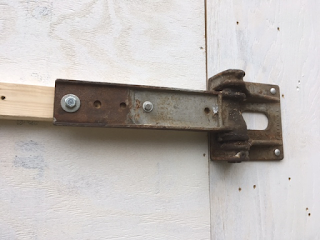 The doors are a simple frame with a diagonal support and skinned with plywood.  The industrial style hinges required that we add some blocking to keep them flat across the door opening plane.  We predrilled the hinge side and the arm side and bolted them into place making sure they were level.  The hinge side was just going through 3/8" plywood so some backer blocks of 3/4" plywood were added on the inside of the building to provide some "meat" for the bolts to hold on to.  These doors are heavy but these hinges are obviously overkill. However, they work well and the doors swing easily.

I used some oak that I had to fashion a sliding latch to hold the doors closed.  You can see that they are very simple but perform just as intended. 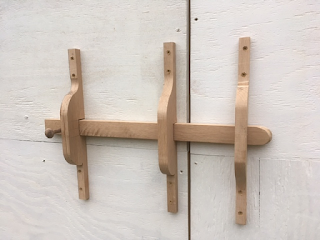 If you've read my previous entry in the "no regrets" column you know that my wife's grandfather was a boat guy and WWII Navy veteran.  She recently made a trip to see her grandmother in Maryland and I asked her to look for something nautical that I could add to the boat shed to give it some boat "bling".  She came home with an old bronze prop from one of her grandfathers boats.  I hung it over the newly installed doors. I love the look and I'm proud to have something from her family watching over our project.  The place really looks like a boat shed now! 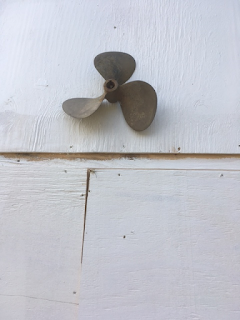 I have continued to keep my eye on craigslist for items that I need.  I feel like I got lucky again with my latest find.  I found an ad from a rigging company that specializes in train derailment recovery.  They are located just west of Buffalo, NY which is about and hour and half away from me.  They recently recovered some 6x6 yellow pine timbers on their way to being pressure treated.  As part of the repayment for the recovery the rigging company took the timbers.  They had 8, 10, 12, 14 and 16 footers and several hundred of them.  The 8, 10 and 12 footers were $10 a piece and the 14 and 16 footers were $20.  I made the trip out and bought 20 ten footers and 2 14 footers. 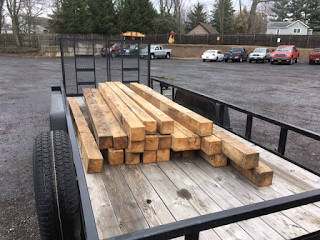 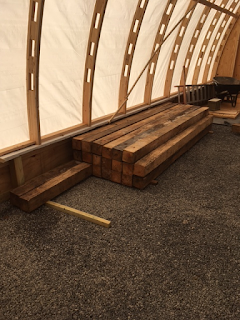 In the meantime I used some old cherry heartwood timbers that were badly warped and some of the new yellow pine timbers to begin assembling a base line to build off of.  I learned that the site work was very well done and leveling all the blocking was fairly easy.  I dug down into the stone in order to again maximize the boat shed headroom and leveled in each piece of blocking to the previous one. 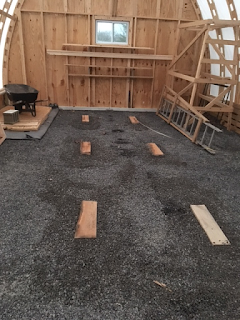 I then laid some 8 footers and some 5 footers across the blocking as a base for the keel to be built upon.  I haven't worked out all the details yet but the reason for the 8 footers is to hopefully come up with a plan to add some kind of wheel assembly to them.  I hope to be able to roll the completed boat right out the front wall when it is completed.  I figure I should be able to jack up the 8 foot sections a bit and fashion some kind of wheel unit to allow it to roll fifty feet or so and become accessible to a crane that can hoist it up on to the tractor trailer for it's trip to Lake Ontario. 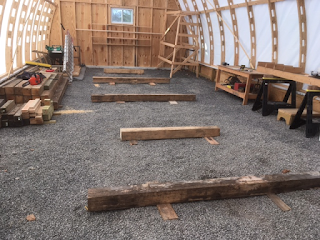 So that's where we stand for now.  The cold winter is approaching and the keel assembly will require some warmer temperatures for the resorcinol glue to work properly.  I am pretty much tapped out with regards to the budget so it may be a few weeks before finances allow the purchase of any more lumber for the keel.  In the meantime I hope that Mr. Buehler finishes his changes on the boat soon and gets me the final plans.  With those in hands I can get started on the frames.  The frames require a large assembly table, so I figure this may be a good time to at least get them started before the big keel gets in the way.